Glasnevin Cemetery was consecrated and opened to the public for the first time on 21st February 1832. The first burial, that of four year old Michael Casey from Francis Street in Dublin, took place on the following day in a section of the cemetery known as Curran’s Square. 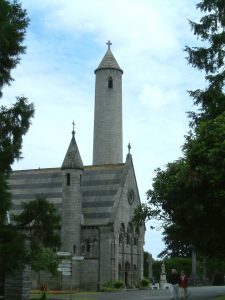 The cemetery was initially known as Prospect Cemetery, a name chosen from the townland of Prospect which surrounded the cemetery lands. Originally covering nine acres of ground, the area of the cemetery has now grown to approximately 124 acres. This includes its expansion on the southern side of the Finglas Road with the section called St. Paul’s. To date the cemetery contains over one million interments. The option of cremation has been provided since March 1982. The majority of those interred are ordinary Dubliners but many are well known for the part they have played in Irish history and for the contribution they have made to Irish politics, religion and culture. The cemetery, therefore, has an important place in the evolution of our country, and the manner of its establishment in 1832 is of historical significance.

Since the Reformation all Catholic churches and churchyards had become the property of the Established Church. It became an increasingly contentious issue that Catholics continued to be buried in such grounds and in many cases without a Catholic burial service. By 1823 the question of Catholic burial had become part of Daniel O’Connell’s campaign for Catholic Emancipation and he felt the only solution was to establish a Catholic burial ground. However, he stipulated that it was to be open to all denominations and that clergy of different faiths would officiate at the relevant burial services. The first Dublin Cemeteries’ Committee responsible for the management of the cemetery was formed from the members of O’Connell’s Catholic Association. Although the first cemetery was opened on 15 October 1829 in Goldenbridge in Dublin, it was from this movement and in this climate that Prospect Cemetery, Glasnevin was founded in 1832.

The first architect of the cemetery was Patrick Byrne (1783-1864). Chosen because of his associations with the Catholic Committee and patronised by the Catholic clergy, he later became well known for the design of St. Paul’s Church in Arran Quay, St. Audeon’s in High Street, the Church of the Three Patrons in Rathgar and several other churches in the city environs and surrounding counties. Patrick Byrne designed the layout of the grounds and the enclosing walls with their many watchtowers, a necessary requirement because of the high incidence of body snatching at this period. Cuban bloodhounds patrolled the cemetery as an additional precaution. The original entrance was located in Prospect Square, where Byrne designed the beautiful neoclassical entrance gate, the cemetery office and the Sexton’s residence. He was responsible for the first ecclesiastical building in the grounds, a temple of neoclassical design which he later adapted to become the first mortuary chapel. This building was situated in an area of the cemetery known as the Old Chapel Circle which contains the grave where Patrick Byrne was interred in 1864. James Joseph McCarthy RHA (1817-1882), a follower of Augustus Pugin, designed the present day entrance gates and offices on the Finglas Road and also the Mortuary Chapel. (See separate entry.)

There is a huge variety of monuments and memorials in Glasnevin. The Round Tower which commemorates Daniel O’Connell dominates the entrance gates. The design was based on an idea formulated by the famous antiquarian George Petrie. He originally intended a group of buildings – the round tower, a Celtic cross and a chapel similar to Cormac’s Chapel in Cashel Co. Tipperary. Because of the huge expense incurred on the tower, the remainder of the project was abandoned. Other fine nineteenth century sculptors whose work is represented in the cemetery include Sir Thomas Farrell, John Hogan, Christopher Moore, John Thomas Papworth and George Coppinger Ashlin.

Bodies were interred in a variety of places ranging from the most expensive vaults to the cheapest plots in the common ground, where in the nineteenth century multiple burials took place. Graves were marked and recorded using a grid system. The first designated poor ground area opened in June 1839, the site of which is now west of the Finglas Road entrance gates. Many religious orders own plots in the cemetery, including the Dominicans, the Franciscans of Merchants Quay, the Carmelites of Whitefriar Street and the Jesuits, in whose plot are interred the remains of the poet Gerard Manley Hopkins. Other literary figures laid to rest in Glasnevin include James Clarence Mangan, Brendan Behan, Dora Sigerson and Christy Brown. Many other areas of life are also represented – Luke Kelly of the Dubliners, Michael Cusack, organiser of the GAA, philantrophists Michael Dargan and Sir Alfred Chester Beatty, and Frank Duff, the founder of the Legion of Mary. Notable women include the  opera singer Margaret Burke Sheridan and the suffragette Hannah Sheehy Skeffington. There is an Irish Army plot, while members of the army who are killed serving with the United Nations are buried in the UN plot. A Republican plot contains the remains of those involved in both the War of Independence and the Civil War. These include Cathal Brugha, Countess Markieviez, O’Donovan Rossa and Maude Gonne McBride. Charles Stewart Parnell, Michael Collins, Roger Casement, Anne Devlin, Eamonn de Valera and James Larkin are only a small sample of the many historical figures interred in the cemetery.

Glasnevin Cemetery remains under the care of the Dublin Cemeteries Committee. The development of the cemetery is an ongoing task with major expansion and refurbishment work being carried out at the present time.

Mass is celebrated by members of the parish clergy every Sunday at 9.45 a.m. The annual blessing of the graves takes place each summer as it has done since the foundation of the cemetery in 1832.

This wonderful and historic place lies within our parish, and our second parish church is the cemetary chapel (see seperate article) Contact the cemetery directly for information on organised walking tours.

Get in touch with the Parish Team today! Click Here